ART 2030 is focused on making art for a better world and sur le chemin is a collaborating designer. Read more about how we’re doing this.

sur le chemin collaborates with ART 2030 which is a non-profit organization aiming to merge art with the 2030 Sustainable Development Goals of the United Nations. ART 2030 is coordinating art projects including public art experiences, panel discussions, and performance art.

In 2018, sur le chemin worked with ART 2030 for the “Tow with the Flow” performance art installation by Lilibeth Cuenca Rasmussen. This is something we also wrote about in our journal here.

The performance has been shown during Roskilde Festival and outside of SMK during CHART end of August.

In late September, Tow with the Flow also took place as part of ART 2030 New York. This happened in collaboration with students from New Design High School. 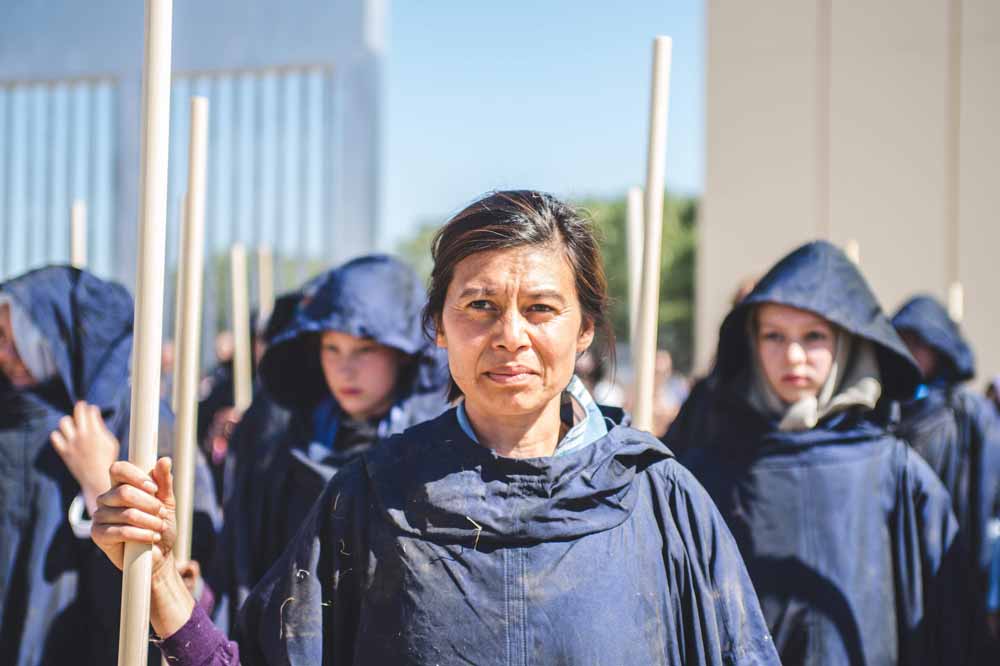 Lilibeth Cuenca Rasmussen wishes to call attention to the atrocious inequalities faced by workers in the textile labour market. However, she needed to also create awareness regarding alternative forms of consumption and production for a sustainable future.

For this purpose, performers emerged from dark cloaks and questioned conventional clothing. They moved on to embracing colour and covering themselves in layers of fabric as a symbol of the ever-growing textile waste.

ART 2030 partnered with sur le chemin to design and produce 17 “all-in-one” costumes. Inspired by the idea of a wardrobe that you can bring along throughout your life a multifuncional design was created. It could be used as clothing but also be transformed into a tent, a large pillow, or even a blanket.

With this, the ART 2030 performance art installation by Lilibeth Cuenca Rasmussen and sur le chemin designer, Kjetil Aas, showed that fashion can be so much more than just a large wardrobe.

Even though mass production – as well as mass consumption – has become prevalent, we do have other options. We just need to make better choices. All clothes can have more than one purpose. And all clothes should.

In fact, this is critical for future consumption if we’re to reach the United Nations 2030 Sustainable Development Goals.

You have Successfully Subscribed!

We use cookies to ensure that we give you the best experience on our website. If you continue to use this site we will assume that you are happy with it.OkRead more